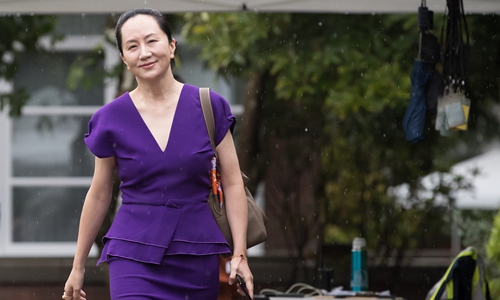 The Supreme Court of British Columbia, Canada, on Wednesday (Canadian local time) argued that the case against Meng Wanzhou, the chief financial officer of China's high-tech giant Huawei, meets a standard called "double criminality." It ruled that extradition proceedings against Meng should proceed.The judgment does not necessarily mean Meng will be extradited to the US. She can appeal the verdict with two avenues of action. The first appeal can pertain to whether or not the extradition is politically motivated. In an interview with Reuters in December 2018, US President Donald Trump said he would certainly intervene with Meng's case if it's good for "the largest trade deal [with China] ever made."Second, her lawyer can lay out that Meng is a victim of abuse of process. If this is to be proved in the second phase of extradition hearing that starts in June, she may be released. Actually, this ruling is somewhat unexpected. Ahead of sentencing, Meng's lawyers, Chinese media outlets, and even a majority of Canadian mainstream media are optimistic about the release of Meng. Improving bilateral ties with China meets Canada's interests, which is an essential consideration of Prime Minister Justin Trudeau amid the ongoing COVID-19 pandemic.The extradition of Meng has become insignificant to the US, while continued detaining of her will further harm Canada. It has been proved that Huawei's business hasn't been affected by the Meng case. As the US cracking down on Huawei has become explicit, holding Meng as hostage will no longer be valuable for Washington.US Attorney General William Barr said Huawei "cannot be trusted" and labeled the Chinese high-tech firm a security threat. What Huawei directly threatens is the information hegemony of the US. In particular, it will make Washington lose the power of global surveillance and global sanctions. In other words, the new industrial revolution represented by Huawei may directly bury US hegemony. The US has thus taken three strategic steps against Huawei. First, the US wanted to swallow up Huawei. The US' initial strategic intent of detaining and extraditing Meng was to use her as a hostage, forcing Huawei to sell itself to the US and thus become a US company. That was all of Meng's substantive strategic significance to the US.Second, the US aimed to strangle Huawei since it failed to swallow up the Chinese company. Washington lobbied its allies to refuse Huawei's 5G technology and also issued new bans in May to bar Huawei and its suppliers from using US technology and software. However, these moves cannot strangle Huawei. Instead, China has invested vigorously in the research and development of high-end chips, getting rid of its dependence on core technology supplied by other countries and regions.Third, since the US has failed in both of the two abovementioned steps, it can now only try to intimidate other Chinese companies by keeping Meng's detention. Besides, if Trump can successfully extradite Meng to the US before the upcoming presidential election, this will be hard evidence that he is tough on China.In the future, Meng's case may last for years and occasionally stir up public opinion. If Trump is reelected, Meng may not be released until the end of his second term.Canada may become the new frontline of China-US disputes. Lamentably, China-Canada relations may be dragged to new lows. China is bound to take retaliatory measures. And with the raging pandemic and the impact of the US unilateralism, Trudeau may face hard times ahead. The Trump administration has been forcing its allies to jointly suppress China. However, its allies will not benefit from this as their own interests will probably be harmed by the US paranoia.In the following moves to contain China, the US may escalate its claim saying that China's smart manufacturing threatens the whole industrial chain of the US system. The US strategy to strangle Huawei has rung alarm to the Chinese government and the Chinese companies.