US travel ban could lead to greater alienation among NATO allies

The original article was posted on Global Times

By announcing a sweeping travel ban for Europeans last week, the US disconnected with many NATO members. The move will have a profoundly negative impact on US-EU relations, and such impact will be magnified against the backdrop of the coronavirus (COVID-19) pandemic.

Misled by the US, Europeans believed the virus originated in China. This is probably a misjudgment and led to a directional mistake in epidemic preventative measures in the US and Europe.The US Centers for Disease Control and Prevention (CDC) said some Americans who presumably died from influenza had tested positive for COVID-19, which means several US cases in recent months could have been misdiagnosed. When the millions of coronavirus test kits promised by US President Donald Trump are dispatched in the hospitals all over the US, the number of COVID-19 infections could skyrocket. 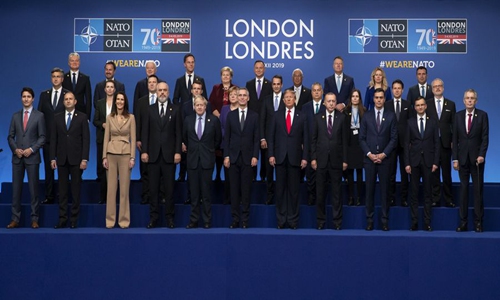 NATO leaders pose for a group photo at the NATO Summit in London, Britain, on December 4, 2019. Photo: Xinhua

As the US and Europe have been slow in responding to COVID-19, implementing city lockdowns, as China has done, could cause more harm than good. But the recent measures taken by the US, France, Italy, and Spain could help contain the outbreak to some extent.

Meanwhile, Italy has been cooperating with China in battling the virus, and Spain has also asked China for assistance. Other Europeans countries are expected to follow. A community of joint efforts in the fight against COVID-19 centering China and Europe has been formed.

In contrast, Europe is in a trust crisis with its traditional ally - the US, which pushed Europe into the corner and misled the continent by comparing COVID-19 to flu that started in China.

The origin of COVID-19 remains unproven. Given Trump's early passive attitude toward epidemic prevention efforts, the possibility that the US is the source of the European epidemic should not be ruled out.

The Trump administration imposed a travel ban on European countries as soon as it attached importance to its virus control efforts and did so without notifying European leaders in advance. This caused panic among Americans in Europe, and many of them chose to return to the US, which may have led to another large-scale outbreak.

Instead of cooperating with Europe to fight the epidemic, the US betrayed its allies and impacted a shaky US-Europe mutual trust, which has apparently irritated Europe.

In a statement, European Commission President Ursula von der Leyen and European Council President Charles Michel said, "The European Union disapproves of the fact that the US decision to improve a travel ban was taken unilaterally and without consultation."

One notable consequence of the US' Europe ban is that the UK will be isolated by both the US and Europe. The Trump administration imposed a travel ban on the UK as well because British Prime Minister Boris Johnson's careless policies against the COVID-19.

Trump had first imposed a travel ban on Europe without including the UK. This couldn't work because there wasn't a travel ban between the UK and other European countries. It is anticipated that major European countries will gradually block their borders. For example, the Schengen Agreement could be halted, and the EU could impose a travel ban on the UK. But what is more serious is the second phase of Brexit negotiations this year will be affected.

There have been confirmed cases of COVID-19 in the US military base in South Korea, which has since been closed. The US has hundreds of overseas military bases. Whether US military forces abroad will get infected is greatly related to local health conditions. If a large-scale virus outbreak occurred at US military bases worldwide, then it would have a huge impact on US global hegemony and could accelerate alienation between the US and Europe.